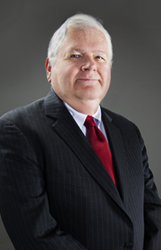 Acclaimed plaintiff’s attorney Gary Jackson, who has tried dozens of trials over his more than 37-year career, recently joined the Law Offices of James Scott Farrin. Working with Hoyt Tessener on Farrin’s expanded litigation team, Jackson will help guide attorney teams as the firm casts a wider litigation net among some of the more complex high-stakes cases.

Jackson has represented North Carolinians against some of the largest and most powerful companies and industries in the country and has been responsible for verdicts and settlements totaling more than $100 million*.

The disputes Jackson has handled have generally been complex, high-stakes litigation involving people’s health, homes, and financial wellbeing. Jackson has successfully* fought against insurance companies, product manufacturers, general contractors, banks, and other entities which have engaged in wrongful conduct.

Understanding the Other Side’s Methods

Jackson hasn’t always fought for the “little guy.” Earlier in his career, he litigated against them as a defense attorney working for the “other side” representing large corporations, insurance companies, and others. For a combined 15 years he was an associate with Baker & Mackenzie, one of the world’s largest law firms, and subsequently a partner with Womble Carlyle Sandridge & Rice in North Carolina. Jackson believes the experience he gained understanding how the defense side operates has helped equip him for the successes* he has achieved on behalf of the deserving underserved.

Jackson said, “After 15 years of practicing with large law firms whose claims to fame were representing corporate interests, I decided to take a different path. I realized that my background and values didn’t line up with advancing the interests of cigarette manufacturers, banks, insurance companies, and other powerful interests. When I did represent those clients, I got cases – however meritless – that were dropped on my desk. They were “institutional” clients that had to be represented, whatever the merit of claims against them. Those corporate entities had enormous resources to fight and obstruct. So I decided to represent people and small businesses who should expect the same quality of advocacy as their well-healed adversaries. Now, I evaluate cases based on their merit, not on the hourly fees I could amass. I no longer handle cases because a corporate client might be able to mount a questionable defense and have the money to pay for that. The cases we pursue are for people. People who deserve justice, but don’t have the resources of my former clients. I sleep a lot better now, and I get up earlier.”

Jackson was one of the lead attorneys in the widely-publicized synthetic stucco lawsuits in the late 1990’s in which he represented homeowners in North Carolina whose homes were damaged due to defective stucco. He represented over 300 homeowners, several commercial businesses, and many homeowner associations in those cases, recovering over $25 million*.

He later joined the law firm of Womble Carlyle in Winston-Salem earning six figures litigating for R.J. Reynolds Tobacco Co. against smokers who claimed their tobacco products harmed their health. Later he had an opportunity to argue on behalf of Reynolds’ retirees.

That case led him to realize that he preferred fighting for the individual, and he subsequently left Womble Carlyle to join a small plaintiff's firm that paid about half the salary he had grown accustomed to.

Jackson admitted the salary cut took some getting used to, but he said he was happier representing individuals instead of big corporations. It was while at this firm that Jackson began working on the defective stucco class action case. During the course of this lengthy case, that law firm disbanded. In an effort to keep the lawsuit moving forward for his clients and to be able to pay his own bills, Jackson sold his 401(k) and took an equity line on his home. Eventually he was able to bring the stucco cases with him to another law firm where he settled nearly 300 of them for about $25 million*.

Gary holds leadership positions in several national and state legal and advocacy organizations, such as the American Association for Justice, the Southern Trial Lawyers Association, and the North Carolina Advocates for Justice. He frequently speaks throughout the country at educational programs for lawyers and authors articles addressing current legal trends and developments.

Why the Law Offices of James Scott Farrin?

As co-counsel on the firm’s 300 Charlotte School of Law cases, Jackson noted the firm’s massive technological and staffing resources as a factor in his decision to join the firm.

Jackson said, “In order to serve individuals who need legal advice and, if necessary, representation, clients need lawyers who have the horsepower, experience, and devotion to this mission: thoroughly evaluating the facts; communicating their conclusions honestly; and vigorously fighting for their rights. I joined James Scott Farrin because I knew that this was the firm where I could best meet those goals and achieve results* for clients at the very highest level. I have practiced for over 37 years, and am very proud of what I have accomplished for people, as their lawyer. This new step is the ultimate opportunity for me to attain my highest and longest reach for the mission that I started 37 years ago.”

** For more information regarding the standards for inclusion, visit http://www.superlawyers.com

*** For more information regarding the standards for inclusion for Business North Carolina’s Legal Elite, visit http://www.businessnc.com

**** For information regarding the standards for peer review ratings, visit http://www.martindale.com

ABOUT THE LAW OFFICES OF JAMES SCOTT FARRIN

Lawyer Reflects on the Profound and Emotionally Affecting Moments of…

January 14, 2020 myadminsite Law Firms Comments Off on Lawyer Reflects on the Profound and Emotionally Affecting Moments of…

The publicity afforded to legal cases often fails to involve the intimate and human aspects of lawyers’ work, and that is where the true meaning of this work lies. LONG ISLAND, N.Y. (PRWEB) January 13, […]

Thousands of small law firms have adopted CosmoLex, and with that, comes a huge wealth of ideas and suggestions. This release is a culmination of those ideas MONMOUTH JUNCTION, N.J. (PRWEB) December 19, 2017 CosmoLex, […]