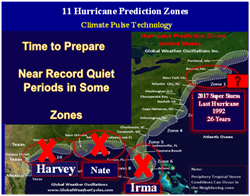 During the next several years - some areas of the United States will have hurricanes and/or tropical storms as bad or worse than Irma and Harvey in 2017.

Global Weather Oscillations (GWO) was recently cited by news media as “being the only major hurricane prediction organization that correctly predicted the hyperactive 2017 Atlantic hurricane season.”

In a recent article published by the Ocala Star Banner (November 29), the newspaper noted that “nearly every major weather agency predicted a normal 2017 hurricane season.” But, “only Global Weather Oscillations Inc. (GWO) had an accurate reading – with a prediction for 17 named storms, nine hurricanes, and five major hurricanes” – which was very close to what really occurred. In addition – GWO predicted six landfalls and there were six, and predicted where they would occur. GWO also predicted the Florida Peninsula would break out of their 12-year hurricane drought in 2017 - with a major category 3-4 hurricane making landfall on the south tip of Florida, and that Texas could break out of their hurricane drought as well.

GWO is a working partner with the International Hurricane Protection Association – INHPA, and provides the most accurate predictions for preparedness and planning. GWO releases their predictions once a year (February) - with no updates required during the hurricane season. Despite GWO’s early prediction release months before other agencies and organizations, GWO has consistently issued the most accurate preseason and landfall location predictions by any organization during the past 10-years.

What separates GWO from the rest of the pack? The newspaper article noted that GWO “has developed a computer model, a one-of-a-kind long-range forecasting tool”. GWO’s research and development has isolated very specific mechanisms that control weather and climate cycles. By utilizing our one of a kind Climate Pulse Prediction Model, we can track historical hurricane cycles and landfalls through time and into the future. The article by the Ocala Star Banner went on to say that “the National Oceanic Atmospheric Administration (and most other organizations) use several short-term weather models” - and unlike GWO - “they do not use weather cycle (Climate Pulse Technology) data to predict hurricanes”.

Preliminary Outlook for the 2018 Hurricane Season –

Professor David Dilley, senior forecaster for GWO – says that GWO’s Climate Pulse Technology model indicates that some regions of the United States have entered, or will be entering the most dangerous hurricane landfall cycle in 70 years. During the next several years - some areas of the United States will have hurricanes and/or tropical storms as bad or worse than Irma and Harvey in 2017.

Global Weather Oscillations produces accurate hurricane predictions 9 months in advance for 11 United States zones from New England to Texas. GWO not only predicts how many named storms there will be, but also where they will landfall. Our official 2018 predictions will be available around late January to early February.

“Digital transformation can have a profound impact on a financial firm, yet too often firms follow a tactical path versus a strategic, business-aligned journey. At Eze Castle, we apply our broad Digital Services portfolio to […]

Leopard Solutions Announces the Release of a Diversity Tool, September…

September 8, 2020 myadminsite Law Comments Off on Leopard Solutions Announces the Release of a Diversity Tool, September…

Leopard Solutions We are excited about the release of our Diversity Search and Benchmarking tool. As a WBE, we are committed to helping create a more equitable legal industry by supplying data and reporting to […]